Would you like to hear a poem?  Well, read one?  I thought so.  This poem is from my first book of poetry, "These Burning Stones".

Will you call my
peonies ponies?
hmmm? Will you
bare my children
weave my garden
make love

to the underbelly of my car?
The drivers follow you
like ducklings after
their mama
They waddle
long thin line

they will navigate your
long thin line
your roofless triad
ride up
the road to
my ponies, my
naked dervish
children, my
broke down

Did you like that?  Who doesn't like the road construction guys, right?  I hope you liked it.  The whole reason I write is to share these things with other people.


Today I slammed through the first three chapters of Spinning the Tides, making the changes needed to move the character younger.  It went pretty well, actually.  Things I stressed over changing suddenly were no problem at all.  Lovely working with it.  Sigh.  And I fell in love with the story all over again.
It's about a girl.  Not just any girl, but the daughter of General Harcourt De La Croix, one of the greatest generals in the Interplanetary Peace Coalition.  So, she's tough.  At least, she thinks she's supposed to be.  She and the remains of her team get stranded on a planet with a deadly virus floating amongst them.  There's no medicine, no innoculations and no inhabitants.  Even the transport ship refuses to answer their pleas for help.  Her boyfriend tried to kill her.  Her boyfriend's uncle is head of the science part of the mission.  He wants to take control and return to Earth.  She must do everything in her power to keep that from happening. 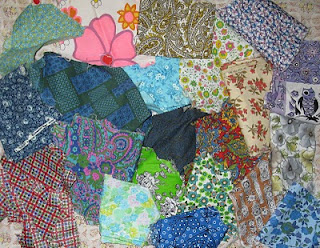 What a story!  Better with her being a teenager than an adult.  Much more dynamic, don't you think? 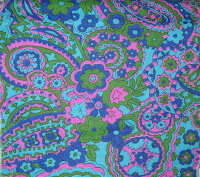 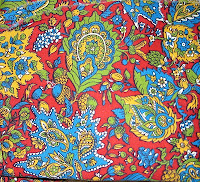 In other news, I finally got some pics taken of some of the scraps in the 70s box that Tisha over at Quilty Therapy sent me.  Some of them are yardage, even.  Groovy, huh?  Double Groovy, even!  Don't tell anyone, but I LOVE paisleys!  And look at those clocks!  Thanks Tisha!!!

I'm a poetry lover and your poem is reality, that's for sure. Also, I just sewed a purple paisley border to my latest quilt--