Design Wall Monday or Husbands and the Best of Plans

So, about mid-day yesterday, my DH says, "Do you have a purple quilt we can give my mother for Christmas?"  I said, "No, but I can make one."  He said, "Okay.  I figure we'll head over there about 6."

I dropped my magazine.  "Tonight?  It's not even December!  I can't make a quilt that fast!"

His answer:  "She likes to shop early.  And doesn't want the mess in her house for a couple months."

We went upstairs and wasted an hour looking through what I already had made before he decided he wanted a new one made.  We compromised on a table topper.  And no, I didn't finish in time.  I get to quilt it today.  She has very bad eyes and can really only see large things.  Details blur.  For example, the flowered border will read to her as a solid mid-blue.  I don't honestly know if she'll be able to distinguish the difference between the light purple and the cream.  And that's okay. Anyway, that's my project for Design Wall Monday. 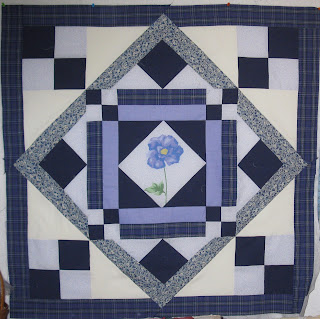 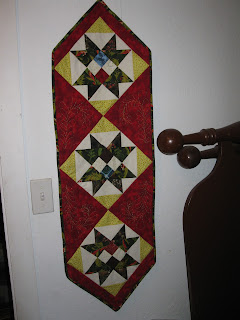 After finishing this table runner, my plans had been to start quilting a Christmas table topper.  Maybe I can do that Thursday, since I have the day off.  Pardon the bed in the picture.  My design wall was full of the above quilt already.

My DH and I rearranged my sewing room, too.  I now have the kitchen table as my sewing table (yay!!!).  The antique table I was using is nestled quilt happily against the wall in the spare bedroom.  It still holds my old Brother machine, but that's all.

We also made room so that DH could get into what once was an upstairs bathroom but has been converted to a painting room for him.  The two kitties were surprised to find that there was another room in the house!  That room has been closed off for as long as we've had them, at least 2-3 years.  It spooked them at first to find a room suddenly there.  Especially Elwood, who was sure it was some sort of black magic that had created it.  Probably just as well, they're not allowed in there.  DH is worried they'll scratch on the canvases.

I notice this morning they seem to have forgotten about the room, now that the door is closed again. 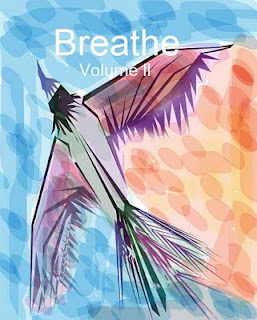 We just picked up our copies of the Breathe book last Wednesday.  Now, I need to update everything web.  That's a project for this week, too.  I'll let you know as soon as it's available for order.

Oh, and I had an agent request to see my Boo and Oscar series.   Keep your fingers crossed!

Great work on such a time crunch!

Husbands are so funny. As nice as it is when they request quilts, they really should have some understanding about how long it takes. Glad you were able to get something together in time.

Love the table topper - it is a great pattern!
The table runner is beautiful too - great feathers!!
Good luck with the book - how exciting!♥

oh my...your husband thinks you are magical! You can produce anything he requests! LOL

Wow, that is an interesting request--a quilt done by 6 pm! Too funny. Glad you had something appropriate. I like your table runner too. Reorganizing sometimes is so satisfying, isn't it?

Your husband isn't the only one who thinks you're magical! I do too!! :)

Wow, the pressure sure was on... some quilting magic from you.