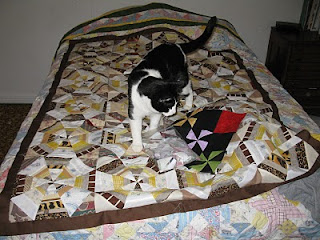 Let's see.  I put together the rest of the center of the Kaleidoscope top.  I made the pinwheel for this week in the Pinwheel Party and I sewed together a baggy of HSTs.  Oh, I also worked on my Dear Jane block A-4.  Yes, I'm still doing it.  Tonight I hope to finish that block and begin on the applique of A-3 for my Liberated Mizz Jane.  In the photo, the lump under the quilt top is Elwood.  Jake is the investigator. 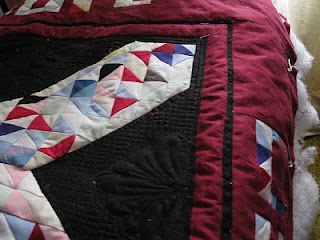 I also, yesterday, worked on my LibAmish quilt.  I finished the feathers and half-feathers (what are those called, anyway?) and the gridwork around them.  I also decided that thin black strip needed something special so I beaded that.  Now I think the burgandy strip is too poofy, so I'll do a quarter inch echo inside the seams on it.  I'll also go back to the crystals in the middle and do the same thing there.  Then I'll decide what's next.
ttyl
-Wendy

Very nice, great job and as I can see quality control is hard at working to make sure all is fine.......

Great job and lots done!!! Heidi definitely has us all focused!!

OMG, you have been busy! Great job indeed!