That’s okay, though.  Dye Candy has at least one drawing every month.  I feel confident I’ll win eventually.

I’m still working on Mom’s quilt.  I’ve finished all the feathers inside the wreaths. 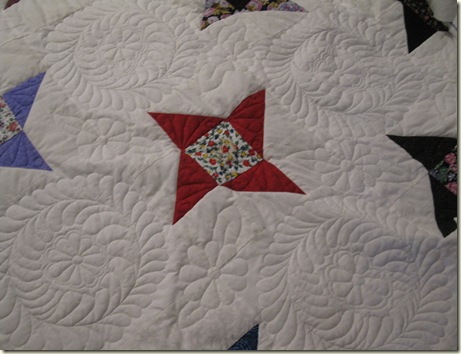 Now I’m working on the setting triangles.  I’ve fallen in love with this quilt.  I see one in my future.

I’m currently working on Loaded, the second section:  Spring.  It’s an original section title, don’t you think?  Well, anyway.  I’m working on it and have the first chapter pretty much done.   It’ll go through a final grooming before it’s ready for publication.  Would you like to read a few paragraphs?  I thought so.

Winter had been as it always was in Maine: heavy, moist and white. It was full of snow and full of wind. The sunny days were a winter sportsman’s paradise. People who would never touch an ATV were suddenly catapulting across the snow in sleds and snowmobiles. Those who never hiked dug out skis, both cross-country and downhill. Others donned snowshoes. They came from all points on the globe.

With the first snowfall, Paul pulled out his snowmobile. He greased it, changed the fluids and checked the tracks and runners. Then, he spent eighteen hour days chasing down errant snowmobilers. Those moments he wasn’t doing that, he hunted poachers. The snow sleds gave greater access to the larger wildlife. Moose and deer were run to the ground and shot.

Finally, in mid-March, an early thaw forced cracks in the ice that covered rivers, lakes and ponds. The snow turned to slush. The few snowmobilers foolish enough to play chicken had to be fished out of the water and dressed for their own funerals.

Paul was just returning from one of these incidents. Two boys had been racing along the banks of the St. John River. One had gotten too close and had gone in, the snowmobile flipping upside down and drowning him.

His cell phone vibrated in his shirt pocket. Pulling his machine into the shed, Paul fished out his phone. Todd’s voice was tight and grim on the other end.

“We have a problem with Sara. It seems she didn’t come home from work last night. No one knows where she is.”

This is a murder mystery.  Sara is Paul’s ex-girlfriend.  Todd is the local police.  Paul is a game warden (though, I’m fairly sure you guessed that).

That’s pretty much all the news for me.  I’m working hard and getting ready for the REALIA 2011 conference in Hartford, Connecticut.  Anyone know any good fabric/quilting shops in that area?

My side yard this morning. 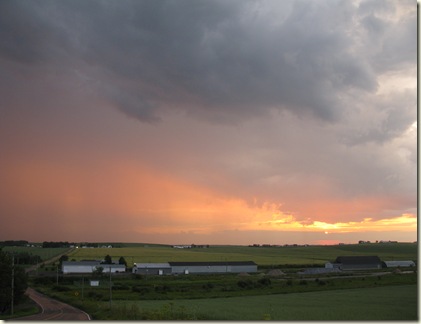 OK, I'm hooked. What happens next?

Thanks for blogging about the giveaway Wendy! I hope you win next time too. I love the photo of your early morning view.

am so excited to see the quilt in REALITY!!!! This is gorgeous!

And - yup - already I'm hooked into your new murder mystery!!!!

Your quilting is beautiful; I remember when you had just begun machine quilting--your mom will love this quilt.

I live in Torrington, Litchfield Cty, CT which is west of Hartford. There is a wonderful quilt shop in Simsbury, CT called Sew Inspired. There may be something closer to Hartford in another direction, but Simsbury isn't a long drive from Bradley Airport. The shop has every style of fabric you might want. It's 25 miles from me, but well worth the drive. I expect your schedule will be full, but let me know if you think we could meet up at Sew Inspired.
Have a good trip,
kathleen connors, aka "Kathleen in CT" from Lib-Quilters

Great photo--such colors. I admire your lovely quilting.
PS I have a give-away on my blog in honor of the 500th post

Also in Sturbridge MA there is a lovely quilt shop - attic something - can't remember - but I know where it is - and that's the most important part!

Near Westfield there is a lovely quilt shop - Southampton Quilts - which I also love.

Haven't been to the one in Simsbury yet - don't know why since I go there every so often..... Thanks, Kathleen